Urban Land Conservancy purchased the vacant Thriftway building in 2014. Later the same year, ULC demolished the building and started working directly with Westwood Unidos, a resident led neighborhood collaborative to determine what interim use would be best for the neighborhood.

In 2016, ULC completed the construction of an interim pocket park and futsal court. Long term plans are to create a beneficial development addressing community need.

Founded in 1984 as a way for local law enforcement and neighborhood residents to encourage positive community building, more than 38 million people now participate in the annual event across the U.S.

The playground, which was funded through a grant from Wells Fargo’s NeighborhoodLIFT program, was constructed in just one day!

Check out our latest video featuring the Westwood community during the Thriftway Pocket Park and futsal court’s grand opening celebration!

ULC, community partners and local Westwood residents joined together to celebrate the grand opening of the Thriftway Pocket Park, which will serve as a temporary space for community use in the heart of Westwood.

Thank you to everyone who participated in the volunteer day on Saturday in Westwood! The futsal court is almost complete!

In case you have not driven down Morrison Road in Westwood for a while, take a look at what ULC has been doing with the Old Thriftway property at 4401 Morrison Road. Here’s what we acquired: Here’s what we decided to do with it: And here is what we will be working with to develop
Continue Reading

This morning ULC was joined by Councilman Paul Lopez, Denver Office of Economic Development executive director Paul Washington, Regional Administrator U.S. Department of Housing and Urban Development Rick Garcia and the Westwood community to celebrate the demolition of the old Thriftway building.  This dangerous eyesore on Morrison Road has been a negative focus of the
Continue Reading

On Tuesday, Urban Land Conservancy’s recently acquired Thriftway property made its television debut on Telemundo Denver during both the 5:30 and 10pm newshours. The story is entirely in Spanish which is great for the mostly Spanish-speaking community in the Westwood neighborhood, however if you are more of an English speaker, The Denver Post article might better suit
Continue Reading 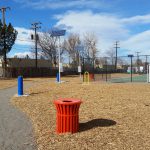 Size: .67 acre  |  Location: Morrison Road in the heart of Westwood  |  Details: ULC acquired Thriftway after property was abandoned and sat vacant for 15 years  |  Demolition of the blighted building occured in summer 2014  |  Future redevelopment plans will be created during a community visioning process through Westwood Unidos and Healthy Places
Continue Reading
Tweet

Size: .67 acre  |  Location: Morrison Road in the heart of Westwood  |  Details: ULC acquired Thriftway after property was abandoned and sat vacant for 15 years  |  Demolition of the blighted building occured in summer 2014  |  Future redevelopment plans will be created during a community visioning process through Westwood Unidos and Healthy Places
Continue Reading
Latest News

Urban Land Conservancy (ULC) would like to acknowledge the passing of Geraldine “Gerie” Grimes on May 11, 2022. Ms....
click here to read more