Urban Land Conservancy Gets the Scoop on the Denver International Airport

Urban Land Conservancy Gets the Scoop on the Denver International Airport

Recently, the staff of the Urban Land Conservancy (ULC) of Denver, Colorado was given a special opportunity to take a behind the scenes tour of the Denver International Airport (DIA). The tour was given by representatives from the Commercial Business Development and Airport Planning team.  ULC got an inside look at what will be happening in the short term and over the next 20 years to the total 53 square miles of airport property, more specifically what will happen with the 9000+ acres of non-aeronautical developable land. 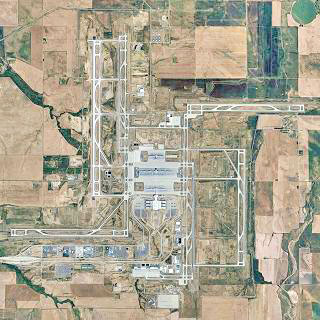 With almost 53 million travelers passing through DIA in 2011, the need to expand for future capacity is here today.  DIA is currently only at half build, and is 1 of only 2 airports in the world that have the resources to double in size (the other being Dubai).  Currently DIA is the 5th busiest passenger airport in the US and the 11th busiest in the world.  The airport is supported by approximately 30,000 employees, including 1,000 being DIA employees, and approximately 1,200 companies at the airport.  The airport is the primary economic engine in the region, generating over $22 billion annually to the Rocky Mountain region.

The “airport city” plan is to expand commercial business and manufacturing. In the next 20 years, economically this equates to more than $300 million in taxes generated and the creation of more than 25,000 jobs.  More than 30,000 people will work in the new airport city.

One of the key current DIA development projects involves FasTracks and the build out of the East Commuter Rail Line.  FasTracks is a twelve-year, $6.9 billion public transportation expansion plan, currently under construction in Metro Denver developed by the Regional Transportation District.  One of the big questions for Denver travelers today is, how will FasTracks serve travelers and employees of DIA?  The final stop of the new line from downtown Denver will end at the future Westin Hotel which is expected to be completed in 2015.  The project is being financed and will be owned by DIA, and then operated by the Westin Hotel.  Trains will go underneath the 500 room hotel into an open air plaza that will eventually incorporate retail and amenities.  See DIA’s South Terminal Redevelopment Program here. (link to http://business.flydenver.com/bizops/southTerminal/index.asp)

So where does the DIA get money for expansion?  Well first of all, no tax dollars are used.  Airport major maintenance and capital improvement projects are funded typically through the issuance of General Airport Revenue Bonds. The borrowing credit is supported solely by airport revenues.  Revenues are generated from several resources including parking, car rental services, concessions and oil and gas production.

Not only does DIA have respectable revenue sources, it is one of the areas leaders in sustainability.  This includes 3 massive solar farms that produce 8% of the energy the airport expends.  In 2004, DIA was the first airport in the United States to design and implement an Environmental Management System encompassing the entire airport that was successfully certified to meet the requirements of the EMS international standard known as ISO 14001. The FAA recently selected DIA to participate in a pilot program aimed at developing a Sustainability Management Master Plan.  To kick off DIA’s Sustainability Management Plan, you are invited to bring your ideas and priorities to the Public Visioning Session (link to (link to: http://business.flydenver.com/community/enviro/index.asp)   at the Evie Garrett Dennis Campus, Student Union (4800 Telluride Street, Denver), Thursday, March 29, 2012, 6:30 p.m.-8:30 p.m. Read more about DIA’s Environmental Management Program here. Link to https://www.faa.gov/airports/environmental/sustainability/

In Denver, one percent of the design and construction budget of any single City capital improvement project over $1 million must be set aside for the inclusion of art in the new project.  The airport’s public art collection was one of the first fully integrated art installations in the nation. The artwork represents Phase I of the public art master plan and includes 30 sculptures, murals, and installations creating one of the most extensive airport art programs in the world.

Now anyone who’s driven into DIA has undoubtedly seen its most controversial landmark, the big blue horse sculpture with the glowing red eyes. Originally commissioned in 1992 it was created by award-winning artist Luis Jimenez and installed in February of 2008. Ironically, Jimenez was killed during construction, when part of the statue fell on him.  Love it or loathe it, though, “Mustang” is doing what art is supposed to do — get attention.

Not only does the Denver International Airport look spectacular sitting under a peaked white Teflon tent against the backdrop of the Rockies, it provides the state of Colorado with more than just a place to catch a flight.  It’s a major source of revenue, jobs and opportunity for Denver to thrive and expand for the next 50 years.

On the Right to Life and Dignity

I believe that access to housing is a fundamental human right. As the Vice President of Real Estate, I...
click here to read more

Urban Land Conservancy recognizes that one of the most substantial barriers to impact for Black-led/serving organizations who aspire to...
click here to read more