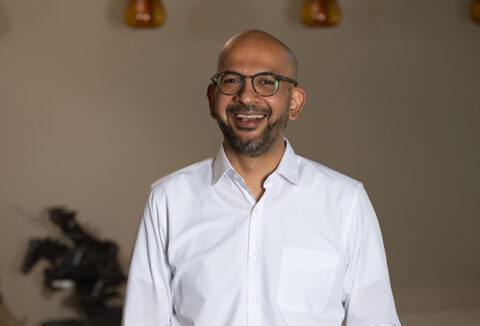 Almost 20 years ago, Urban Land Conservancy began as one of the “ventures” of Sam and Nancy Gary, founder and namesake of Gary Community Ventures. As an independent nonprofit real estate organization,ULC continues to work closely with Gary on a number of policy issues that affect Colorado. In fact, most recently, ULC and Gary joined forces with more than 260 organizations across the state to pass Proposition 123, a first-of-its-kind statewide ballot measure that will provide down payment assistance to first time home buyers, lower rent and build more affordable housing for generations of Coloradans.

As Gary welcomes Santhosh Ramdoss, interim president and CEO, we’re excited to continue our partnership and and look for opportunities to expand our collective impact in the community. We recently sat down with Santhosh to talk more about Gary’s work and his perspective as the organization’s new leader.

“Gary is unique compared to a lot of other foundations,” Ramdoss said. According to him, Sam Gary, the founder of both Gary Community Ventures and Urban Land Conservancy, envisioned the foundation as a group that would bring business policy and philanthropy together to address large systemic issues. As such, the organization combines the resources of its foundation, Gary Philanthropy, with its Certified B Corp, Gary Ventures, to transform Colorado’s opportunity landscape. Together these entities work to create impact  in three big areas: economic mobility for low-income families, youth success, and school readiness.

“I often refer to us as a Swiss army knife,” said Ramdoss.”We bring all these tools to the table to directly address the needs of communities and families. We believe change happens at the intersection of sectors.”

For example, instead of trying to help tackle Colorado’s housing crisis from just one angle, Gary  deploys resources from Gary Philanthropy to make grants, mission investments, and build ventures, while Gary Ventures influences policy change. Creating, acquiring, and preserving housing requires a lot of capital, according to Ramdoss, which is why creating grants and making investments are so crucial. There’s the initiatives that Gary and ULC launched in 2017 with the creation of Elevation Community Land Trust. Most recently, Gary created the Dearfield Fund for Black Wealth, which helps Black and African American communities build a foundation of intergenerational wealth and financial well-being, primarily through home ownership. Ramdoss also named Colorado Housing Accelerators Initiative as an especially impactful venture that Gary has been involved with.

Gary Ventures often takes lessons learned from those ventures, and uses them to change and influence housing policy.

“Through those experiences with funding and creating new ventures, we learned a lot of lessons that we were able to bring together in drafting Proposition 123,” says Ramdoss. “Proposition 123 is the legislative example of comprehensively addressing the affordable housing crisis in Colorado.”

Ramdoss attributes the success of Proposition 123 to the coalition of 260+ organizations and community leaders who supported the measure.

“It was a combination of organizations and ideas that became a big, systemic effort,”says Ramdoss. “It’s essentially the core tenet of how Gary works, which is to say people interact with the world not in silos, they interact with the world in systems. And for us to create that systemic impact, we need to think across sectors and bring all our tools to work in service of our community.”

To learn more about Proposition 123 and the programs it creates, click here.

When asked about his new role as interim President and CEO, Ramdoss said, “Well, I am excited, because when the board asked me to step in as interim, I realized that I’ve been doing social impact work on the intersection of money and impact for about two decades. And to me, the last three years have been the most powerful in terms of being able to meaningfully deliver outcomes to communities.”

Ramdoss says he’s been able to see the impact to the community personally. Maria Empanada, a fast-casual local chain in his neighborhood on South Broadway, was awarded $3.5 million by Colorado Impact Fund, a limited partner of Gary, so they could expand their business and community impact. Affordable housing is now being developed in his neighborhood, using funds that Gary was able to make available. Ramdoss’s daughter attends Denver Public Schools, so he’s actively involved in addressing education issues.

“Philanthropy can be so distant,” says Ramdoss. “When philanthropists are far away from reality, it creates significant issues with power and accountability. To me, the beauty of Gary Community Ventures is that we’re in an awesome community. I’m not just somebody who holds power and gives away dollars, I’m somebody who’s experiencing these challenges, and wants to be part of the solution.”

“I can’t think of any other organization nationally that does impactful place-based work like Gary does,” Ramdoss says. “So it was a no-brainer from a mission standpoint for me to jump in and say, yeah, I will totally step in. And I’m feeling really inspired. Denver’s journey to becoming a more inclusive, more equitable city is something that I dream of, as I think of my own seven-year-old-daughter. I’m pretty pumped.”