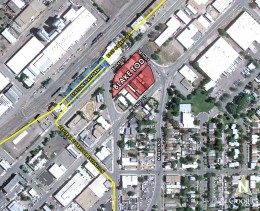 Blake TOD is a 1.4 acre property at 38th Street and Walnut Street. This is the site of the first stop on RTD’s future East Corridor Commuter Line connecting Downtown Union Station to Denver International Airport. This property, which has been vacant for the past year, will be stabilized and eventually developed as a mixed-use site with an emphasis on affordable housing. Development at this site will be catalytic to the area, with much needed access to transit at the Blake Street Station scheduled to be operational in early 2016.

This property, purchased for $1.7 million in November of 2011, is the 6th acquisition using the Transit-Oriented Development Fund.