This morning ULC was joined by Councilman Paul Lopez, Denver Office of Economic Development executive director Paul Washington, Regional Administrator U.S. Department of Housing and Urban Development Rick Garcia and the Westwood community to celebrate the demolition of the old Thriftway building.  This dangerous eyesore on Morrison Road has been a negative focus of the community for many years, and ULC was proud to share the demolition announcement with local Westwood residents, businesses and community stakeholders.

ULC took the first step in demolishing the property this morning as community stakeholders pulled down the old, broken sign.  Building demolition will take place later in September, and ULC working with the community on creating a positive interim use of the site until a permanent development opportunity has been identified.  The demolition, abatement and remediation of the Thriftway property is supported by the Denver Office of Economic Development who has prioritized Morrison Road  as an economic area of focus and revitalization in Denver.

Westwood Unidos and Healthy Places Westwood, key partners of ULC, are not only celebrating the removal of Thriftway, but are instrumental in guiding ULC in future development to ensure community benefit.

Congratulations to the many partners who ULC has worked with to acquire and now demolish the property, this is a great day for the Westwood community!  Click here to watch a 9News report that shows the Thriftway sign coming down! 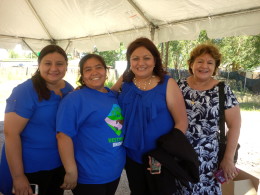