About the Mile High Vista Development

About the Mile High Vista Development 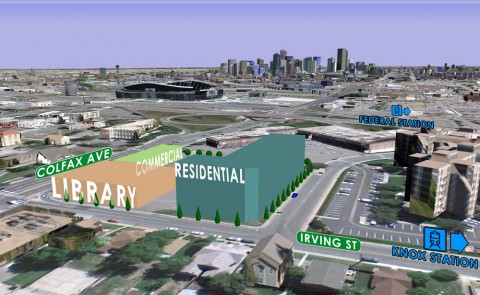 The Urban Land Conservancy purchased this two-acre parcel of land along west Denver’s FasTracks light rail corridor. ULC will be the master developer of the site that will include the new west Denver library, a mixed-use workforce housing development with Del Norte Neighborhood Development, and a commercial building. This acquisition will provide enormous opportunity for additional transit oriented development (TOD) along west Colfax and the future Knox and Decatur light rail stations.

ULC purchased a portion of the 6.4-acre Festival Plaza from Shanghai Land Investment, L.L.C. for $2,140,000 using Denver’s transit oriented development (TOD) Fund, set up specifically for acquiring land near existing or future light rail stops and high frequency bus routes. The TOD Fund is financed in part by the City and County of Denver and Enterprise Communities Partners, who also administer the Fund. ULC President Aaron Miripol says “We see this site as a strategic gateway to the west Colfax Denver community, the mix of uses in this development will bring great economic benefit to the area which is essential to the revitalization of the neighborhood.”

The City and County of Denver plans to purchase approximately 0.8 acres of this two-acre parcel as the site for the west Denver library. Denver’s City Librarian Shirley Amore says, “This is a perfect site for the new library. We are looking forward to working with the Urban Land Conservancy, our architect, Studiotrope, and the surrounding neighborhoods to design and build a library that will transform not only the entrance to west Colfax but also the broader community.”