Construction has begun at both the Curtis Park Community Center and the neighboring historic Curtis Park Nonprofit Center. 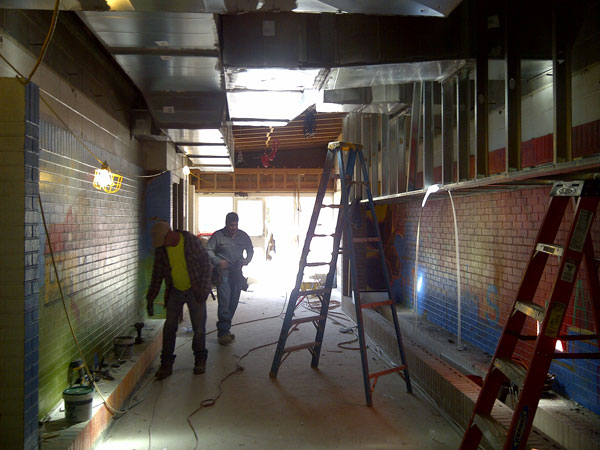 The Curtis Park Community Center was originally built in 1967 and was used as a recreation and neighborhood community events center.  In January 2012 ULC purchased the property and began renovation work to convert the space from a recreation center to a private pay/scholarship tuition based Montessori school with a shared space gymnasium component to serve other needs with in the community.

The conversion and renovation of the shared space gymnasium includes new paint, new mechanical system, new lighting, new gym floor and new bathrooms with a separate entry to provide a shared space identity separate from the Family Star Montessori school.  Family Star is converting the remaining space from an old classroom and recreation space to a Montessori specific programmed space. This dedicated programming space requires specific childcare requirements such as specific square footage per child for both classroom and exterior play areas. To complete these improvements, ULC contracted with Slater Paull architects to design and engineer the facility and DSP Builders for the construction and improvements.

The Curtis Park Nonprofit Center is being renovated to include cosmetic improvements, expanded common area, new bathrooms and an upgraded security and fire system.  Nonprofit tenants will occupy the updated historical building before year end.

ULC’s will have invested more than $1.5 million into the facility including acquisition and improvements by the end of 2012.  The Community Center and Nonprofit Center are model examples of how ULC invests in and preserves community real estate assets for neighborhood benefit.

Solidarity in the Name of Justice

ULC posits that it is the duty of every person and organization who claims a commitment to equity to...
click here to read more