156 affordable apartments are being constructed at the future Colorado Station on the East Rail Commuter Line scheduled to open in early 2016.

The new Park Hill Station Apartments are the first phase of a larger transit oriented community being planned around the station. ULC is working with the community to determine development plans that will create local jobs, and provide the surrounding neighborhoods with additional housing, retail and commercial space. 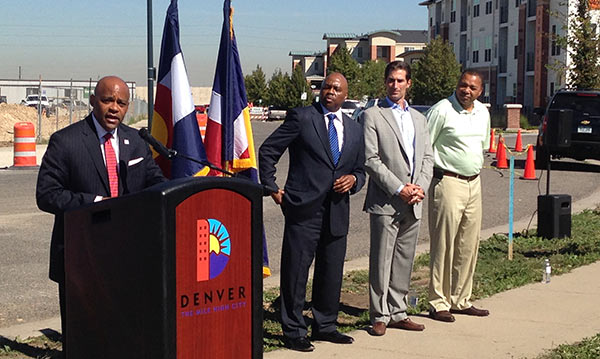 Mayor Michael B. Hancock, RTD CEO Phil Washington and Paul Washington, Executive Director of the Denver Office of Economic Development all joined Delwest for the event, and all spoke of the need for affordable housing at this site:

“I don’t think there is a more important issue as Mayor then accessible affordable housing. It’s the chief priority,” stated Mayor Hancock.

Partner Spotlight of the Month: The Fax Partnership

The Fax Partnership (The Fax), a 501(c)3 organization, enables the East Colfax Corridor to continue growing as an equitable,...
click here to read more

One Year Later: What I Hope We’ve Learned

The pandemic has provided a glimpse into what many Americans (and communities around the world) deal with on a...
click here to read more

The Villa Park Neighborhood is located in West Denver, about three miles west of Downtown Denver. It is chiefly...
click here to read more