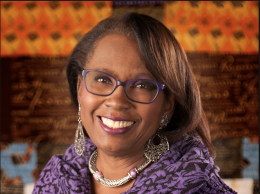 Urban Land Conservancy (ULC) would like to acknowledge the passing of Geraldine “Gerie” Grimes on May 11, 2022.

Ms. Grimes was a pillar in her community and beyond, providing leadership to organizations such as the Center for African American Health, Denver Early Childhood Council, Colorado Black Women for Political Action, Holly Area Redevelopment Project (HARP), and many more. She was the President/CEO of the Hope Center for 12 years, and worked there for close to 40 years, creating an exemplary program for early childhood education and programs for adults with disabilities.

ULC was lucky enough to begin working with Ms. Grimes in 2009, when ULC purchased the former Holly Square Shopping Center with the aim of redeveloping it for community benefit.

ULC CEO Aaron Miripol recalls of working with her on the Holly Area Redevelopment Project, “She was one of the leading stakeholders who got involved very early. We asked her what needed to happen at the Holly, and she was clear that we needed to do something that had the community leading the process and ULC needed to protect the long term benefits that came out of the redevelopment.”

Tony Pickett, President of Grounded Solutions Network, and former Senior VP of Master Site for ULC, also worked with Ms. Grimes on the Holly Area Redevelopment Project, said, “[Ms. Grimes] was such a force for good. I’m eternally grateful for her warm welcome and unwavering support upon my arrival in Denver. I so appreciate all her faith in both of us and our commitment to work beside her in serving the North East Park Hill (NEPH) community. She was the best kind of leader and role model for us all.”

“Her work and the lives she touched are much bigger than all of us,” said Aaron Miripol.

“Mrs. Grimes’ life, work and care for the Northeast Denver community demanded the respect of multiple generations”, stated LaDawn Sullivan, Director of the Black Resilience in Colorado (BRIC) Fund and Hope Center board member. “She brought her whole self to the Holly Area Redevelopment Project, and she put into the process no less than what she expected from the NEPH community. She saw OUR community’s potential, and being dedicated to Black children for over 40 years at Hope Center, Mrs. Grimes knew the importance of investing for the community’s future.”

Gerie Grimes leaves behind a legacy of commitment to her community, and commitment to this city, its people, and every person who lacks opportunity due to inequity.